A visual treat to anyone who lays his/her eyes on it, Phad is a form of scroll painting which has, over the centuries, narrated stories to people in village gatherings. Now, Kalyan Joshi, a veteran of the Phad art form, is using his scrolls to narrate stories about the coronavirus pandemic and the lockdown 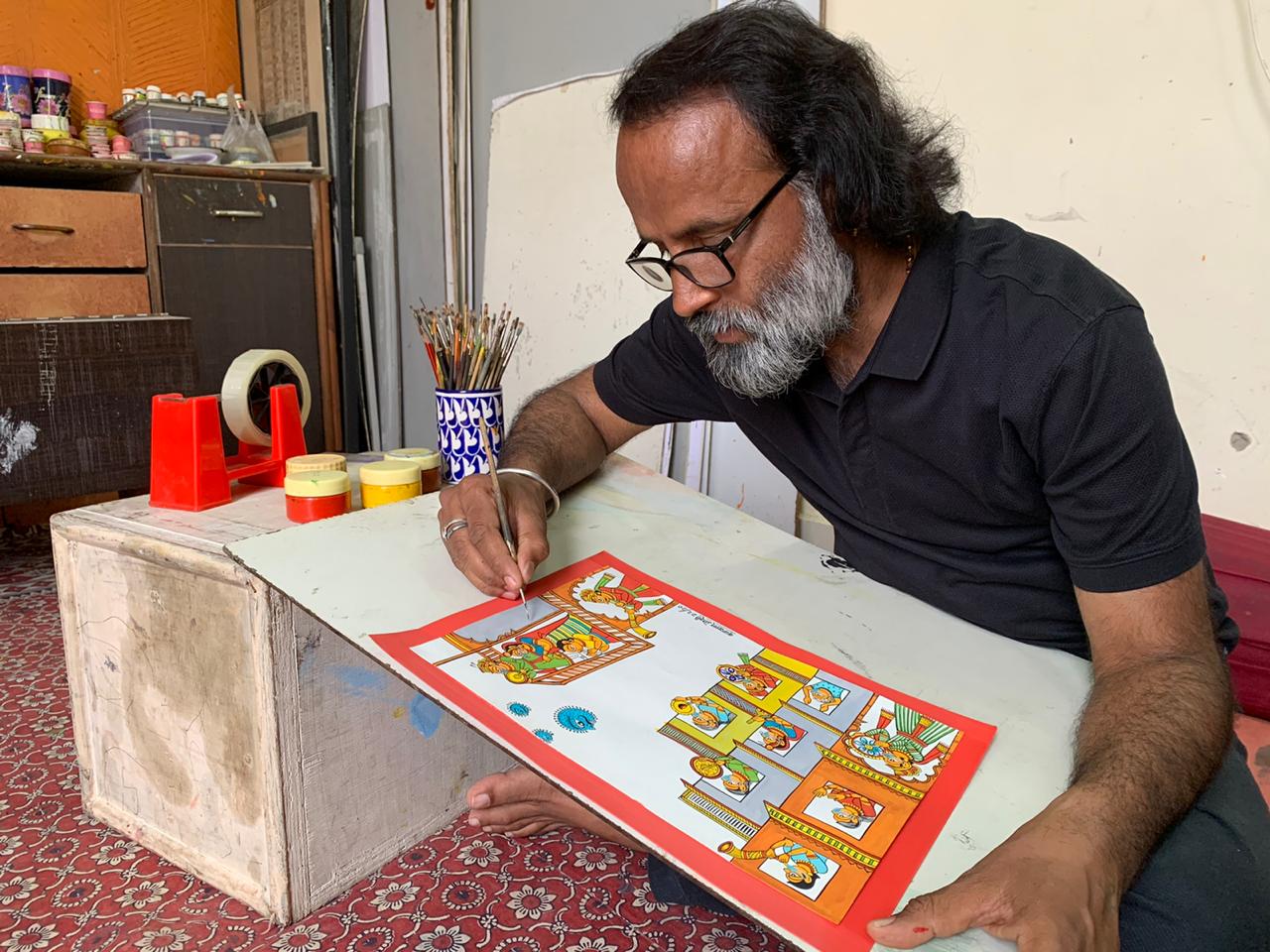 The style has remained the same, and so has the natural colour palette. Even the easel — cotton fabric — on which this centuries-old traditional art form of Rajasthan – Phad — has always been done, is a constant. “Bas kahaani badal gayi (only the story has changed),” Kalyan Joshi, a veteran of the Phad art form told Gaon Connection.

Joshi is expanding the repertoire of this 13th-century art form to include messages on coronavirus diseases (COVID-19) and documenting the present times, along with the traditional stories of deities and gods. One such visual documentation is his 41-scene, 2.5 feet x 4 feet-sized Phad that encapsulates how the novel coronavirus laid siege in the country, followed by the nationwide lockdown, which has dramatically changed the lives of all the citizens in the country.

An age-old tradition of storytelling

A visual treat to anyone who lays his/her eyes on it, Phad is a form of scroll painting which has, over the centuries, narrated stories to people in village gatherings. These stories — of deities Devnarayanji, an incarnation of Lord Vishnu, and Pabuji, a local hero — would be narrated by priest-singers called Bhopas and Bhopis, who would carry these paintings with them.

In a dramatic unfolding of scenes, the narrators would un-scroll every fold, or Phad — as it is called in the local language — amid a large gathering of people after the sunset, and reveal parts of their story. Phad, therefore, is a kind of narrative storytelling in which two communities played a role — the artistes and the narrators.

According to Kalyan Joshi, it was the members of the Joshi family, belonging to the Chipa caste, who created these paintings. Therefore, the Phad art form has been passed down his family through generations. “Over 700 years,” he said. Joshi’s father, Shree Lal Joshi is a Padma Shree, and his brother, Gopal Joshi, is also a national-awardee artist.

“However, as radio, television, and now mobile phones have made inroads into the villages, the attraction towards Phad has gradually decreased. Other mediums of entertainment have become popular,” he lamented.

With the lowering interest in this form of storytelling in villages, the number of Bhopas and Bhopis narrating these stories have reduced over time. This tradition has not disappeared, but earlier it was routine for Bhopas and Bhopis to be invited. Now, it’s become occasional, like in the event of a religious ceremony in a house.

It’s a similar story for the Phad paintings themselves. With digital prints of such scrolls making an appearance, the challenge is even higher. “For example, if we had got orders for 1,000 paintings earlier, now we get just 50,” complained Joshi. To compensate, the price of these handmade, intricately-designed scrolls has also increased. But if it’s a Bhopa who comes for the Phad, the price is negotiated by a big margin.

“A 20 feet by 5 feet Phad of Pabuji costs about Rs 2 lakh, but for a Bhopa we charge Rs 30,000 only,” said Joshi. “My father would always say — never send back a Bhopa empty-handed. We will not let that tradition die,” he added.

The possibility of fading away in the labyrinth of time was not an impossibility and therefore, to remain relevant in the present times and attract a larger audience, Joshi decided to expand the repertoire of Phad painting. He began including stories and characters from the Ramayana, Mahabharata, Hanuman Chalisa, and even the Panchatantra tales, in his scrolls.

Slowly and over time, social and environmental issues started making appearances in his paintings too. Two years back, for instance, Joshi did a series on water conservation.

Commissioned by a non-profit, the paintings were done on flex boards and on the boundary walls in Chirawa in the Shekhawati region of Rajasthan where water scarcity is a major issue. The paintings, Joshi said, recapped scenes of the past — when fields and festivals had enough water — to a time when ponds dried up and there was over-extraction of water for borewells. This led to people migrating from the area, spread of diseases, and other problems. The final series showed water harvesting and the recharge of wells which ultimately brought life back to the village.

So, while the story has changed, the essence of Phad painting — of sending a message to the people — has remained the same. “The stories of our deities have a message through them. Just like that, these stories that I paint now, of these times, have a social message too,” Joshi said.

When Covid-19 made an appearance in Phad

On March 19, the first COVID-19 case was detected in Bhilwara and the immediate world changed dramatically. The scenes and the experience — of educational institutions, markets, eateries, everything, closing down and of people disappearing from the busy streets — inspired a visual story in Joshi’s mind.

“I painted three scenes. The first of a woman washing her hands. The second of two people in masks greeting each other, one had extended his hand, but the other folded his in a ‘Namaste’. And the third, a person cycling far from a crowd. Each picture had a message — the importance of hand-washing and on physical distancing, that has become essential to avoid the spread of the (COVID-19) infection,” he told Gaon Connection.

The style and the colours used for these paintings were the traditional, naturally-sourced ones. Even the process of filling the colours into the drawings was the same — first was beige, or “colour of the skin”, then comes yellow (for the jewellery), then green (for foliage and dresses), brown, red, blue, and finally, the most delicate, black, for the outline of all the figures.

There were, however, some differences. “Instead of cloth, for example, I did these scenes on paper,” Joshi said. And since it was not possible to narrate these scenes publicly, given the lockdown, he decided to use social media to spread his message.

In his next narration through Phad, Joshi, went back to his traditional easel —the starched cotton cloth. This scroll, a 41-scene Phad, which traces the timeline since the first coronavirus case was detected in the country, is a marvellous amalgamation of a modern-day story, narrated old-school style.

“The size of this Phad is 2.5 feet (width) by 4 feet (length), and the scenes are in miniature form,” Joshi said. The story unfolds from the time coronavirus was first detected in Wuhan, China, and how it spread throughout the world (depicted through a dragon spewing the virus), finally reaching India. There are scenes from the airport and how travellers are screened, from hospitals where healthcare workers — all in masks — are treating corona patients, even on the various display of gratitude to frontline workers by the people — through lighting of diyas, showering flower petals, and clapping hands.

“Traditionally, Phad does not have any text, but in this, I have added a line each for better understanding, like a graphic novel,” he said. The scroll also has scenes from homes and how people have and are continuing (to some extent) to deal with the lockdown — families are shown spending time together, individuals working from home, children helping in the kitchen, people pursuing their hobbies like painting. A few scenes, like that of people feeding animals, also advise on the need to help others in this time of crisis.

These paintings — the first three scenes, and then the 41-scene scroll — were the first part of Joshi’s experiments with Phad in relation to COVID-19. “In the second part, I am visualising scenes from the village and how migrant workers are returning home from the cities on foot, in trains and buses,” said Joshi. “I want to show it is important to follow the quarantine rules and, if not followed, there is a risk of infecting the villages,” he added.

Like many other traditional art forms, the process of making a Phad painting was closely guarded within the Joshi family — so much so, that even daughters were not taught the art form, “since they would get married and become a part of another family one day”.

Shree Lal Joshi, however, broke the tradition, when he decided to teach the art form to other artists and established the Joshi Kala Kunj in Bhilwara in 1960. This was rebranded as Chitrashala in 1990, under Kalyan Joshi and his brother, Gopal Joshi that has, till date, taught more than 4,000 students. They also started conducting summer classes — and now, during the lockdown, online classes. More than 200 of Chitrashala’s students are now earning their living through Phad — either through painting on souvenirs and clothes, or through teaching.

“The popularity of Phad grew so much that it became a common practice for girls to take classes for two-three months before their wedding and then make a Phad painting which would become a part of her trousseau,” Kalyan Joshi said. “Now people assume that if their daughter-in-law is from Bhilwara, she would definitely know Phad. We have had students who, after getting married, have come to us to learn the art form,” he added.

Like in Phad itself, its story, however, does not end here. Kalyan Joshi promises there is yet more to be unfolded and revealed.