As the system recovers from COVID19-related shutdowns, it is time to focus more on station infrastructure to improve safety in light of the continuing public health threat. 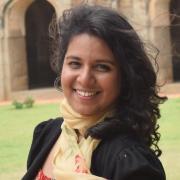 Mumbai’s suburban rail system is the world’s busiest, serving 7.5 million riders a day. This photo story is an attempt at documenting moments of precarious travel in Mumbai city, as part of a larger investigation focused on infrastructure design that began before the COVID-19 pandemic. Now, as the system reboots from its first ever complete shutdown, this work has taken on new importance. The disruption provides an opportune time to experiment with varying densities across suburban lines and to better understand people’s behaviour.

WRI India is investigating ways to adopt a “level of service” approach in combination with crowd management science to develop a framework to measure comfort and safety on public transit in new ways. The idea is to consider the rail system from the user’s perspective and to consider qualitative measures, rather than focusing solely on quantitative measures of success. While traditional approaches to crowding focus on in-vehicle density, we are also analyzing crowding patterns across station areas like platforms, staircases, entrances and exits and foot over-bridges. In doing so, we plan to develop a localized understanding of density with increased applicability to the Indian context.

As part of this work, WRI India began documenting photographs and video collected by commuters across the suburban network. From a series of photographs collected before lockdown, we analyzed density ranges by scaling the images based on measurements collected onsite and basic assumptions.

The overriding feature of the Mumbai Suburban Railway is crowding. Trains most often operate far beyond official capacity – 2.6 times on average, according to officials – with between 14-16 people per square meter.

For years, improvements have been focused on adding lines to cater to peak commuting times, better signalling systems and increasing capacity – for example, by replacing 9-car trains with 12-15 car trains. It was only after the deadly stampede at the Elphinstone Road station, recently renamed Prabhadevi, in 2017 that the importance of access infrastructure – that is, the design of platforms, foot-over-bridges, staircases and entrances – became a larger part of the public debate. Subsequent incidents of infrastructure failures at CST, Charni Road and Andheri stations were followed by criminal suits against the Municipal Corporation and the Mumbai Rail Vikas Corporation, the organisation responsible for the planning and execution of suburban rail-related projects under Mumbai Urban Transport Projects.

As the system recovers from coronavirus-related shutdowns, now is the time to focus more on station infrastructure to improve safety – not only in train operations but in light of the continuing public health threat.

Take the twin Prabhadevi-Parel stations, where 23 people lost their lives in 2017. Reports claim that at peak hour around 100,000 people use the foot-over bridge between the stations, leading to incidents of frequent panic and chaos. But it’s not only the bridge where there are issues of under-designed or poorly thought access infrastructure. There are four entry-exit points to the two stations, some served by narrow access roads. Surveying one of these, we estimated about 38,600 people per hour flowed through in just one evening.

Given that 46% of Greater Mumbai uses non-motorized transport modes, a fairer distribution of road space and infrastructure would cater more to the high pedestrian demand. This speaks to the need for a more deliberate and integrated approach to planning.

Indeed, both of the neighbourhoods served by Prabhadevi and Bandra-East stations have been converted into corporate office spaces and high-end restaurants in recent years, leading to increased pedestrian volume.

Overcrowded platforms, walkways and foot-bridges are a spillover effect of overcrowded trains. But station access design often makes things worse. At Kurla station, crowds alight from trains onto a wide platform (7.9m) only to be shoved into a 3.5m-wide staircase. Density here ranges between 10-12 people per square meter.

Kurla, located amidst a mix of residential and business hubs, is among the busiest stations in the central suburban line and is also an interchange station across the central and harbour lines.

Understanding comfort and conflicting use cases

Crowding is quantifiable and creates clear safety risks; however, station areas do more than provide access to transit for commuters, they also help set the tone for interactions between commuters and are spaces of economic activity.

Mumbai’s suburban train system creates economic opportunity for an important segment of the city’s population: its street vendors and hawkers, who sell everything from food and clothes on trains and in stations and use the system to transport lunch dabbas and other products from markets across the city. There’s a fear of the space being cleared to create better pedestrian movement and what it would mean for their livelihoods.

The challenge is to find a balance between conflicting uses. Where tremendous density may be useful in some respects for vendors, it’s experienced very differently by some commuters. Research emphasizes that comfort is contextual, as it relates to anthropometric measurements, demographic features like gender and age, and even culture. Evidence shows that many women around the world feel unsafe using public transit, especially when it’s crowded, which on a broader scale affects their access to jobs, education, health care and other services and opportunities.

In the case of women and children, crowding in Mumbai’s rail system puts them more at risk of theft, sexual harassment, and abuse, causing psychological insecurity and real harm. A study by the Tata Institute of Social Sciences found that women represented a quarter of commuters on Mumbai’s suburban rail system and that they experience crowding differently than men. While the crush loads can be uncomfortable for both men and women, the study found it has significant psychological implications for women, evoking fear and insecurity.

What’s more, the experience of crowding clearly doesn’t remain limited to train compartments, which are segregated by gender, but spills onto platforms, staircases, access roads and foot-over bridges.

Tracing the route of a user through this space makes design problems clear at every turn. The crowd density is 14-16 people per square meter. Commuters press against each other, struggling and leading to asphyxiation and extreme discomfort, especially in the summer months.

Mumbai’s suburban railway has fundamental problems with crowding and station infrastructure. So how has it dealt with coronavirus shutdowns? After 84 days of complete shutdown, local train service resumed for “essential workers” travelling from the metropolitan region on June 15. Authorities identified about 125,000 out of 7.5-8 million daily commuters who will be allowed to travel under predefined conditions. Capacity has been limited to 700 passengers per train, down from the normal load of about 1,200 per train. Passengers are expected to maintain physical distancing of at least one meter between one another, whether on the train and on platforms.

While such drastically reduced capacities may seem extreme, it’s necessary given existing infrastructure, particularly in and around stations. Even now, it’s difficult to maintain full physical distancing inside trains as there’s minimal possibility of extending cart widths or better managing in-vehicle space amid the current demand. But access areas, including platforms and staircases, can be designed to accommodate increased capacity, creating additional waiting spaces to allow physical distancing among the users.

There are solutions. Now, when traffic is slower than usual, is the time to experiment with changes that can begin addressing the Mumbai Suburban Railway’s more fundamental problems.

More attention to station design can create more space for distancing and reduce unsafe conditions for riders – both now during these extraordinary times and when commuting one day returns to normal. Increased station access and better management of peak crowd densities can be achieved through the widening of existing footbridges, construction of more footbridges, and more connections between them. Universal design principles for the safe movement of specially-abled people, women, children and the elderly should be followed, including around lighting, colour and tactile cues.

Moreover, facilities for online ticketing and functional vending machines at multiple entry/exit points could reduce crowding at key chokepoints. Dynamic data capture and crowd monitoring, meanwhile, could allow trains to be held up when platforms are too crowded for offloading.

But lacking these has left the city with the only option of holding back demand in public transport even more. At present, police personnel are tasked with the responsibility of crowd control at the entrance and exits of staircases, footbridges and platforms. If the city is to reach its goal of returning to 30-50% operational capacity within the next 6-12 months, something must change.

To initiate discussions around a level-of-service framework, WRI India is conducting a research project on mainstreaming the use of photo and video documentation. We are exploring how AI-enabled technology can provide rapid ways to analyze video feeds and simulate scenarios to better understand people’s behaviour, both under normal conditions and under lockdown measures. As Mumbai unlocks in a phased manner, we plan to restart the work of visual documentation and at the same time initiate dialogues with authorities across stakeholder groups to gauge a deeper understanding of the system.

This blog has been sourced from WRI India, and it was originally published on TheCityFix.